Sam Phillips has announced the first leg of her tour in a unique and amusing way. Even if you saw on her Borders tour, don't miss her with the full band. You will not be disappointed.

Raul Malo at The Coach House

We came to see Raul because Maria loves his voice. I was a bit concerned after seeing his show in Austin at the ACL Festival. It opened with a bang and closed with a bang, but the middle section was a bit slow. The problem it turned out was that RaulMalo needs more than an hour to get all of his musical ideas into play. And so, Wednesday night, we got to see the real show, and what a treat it was. Opening with a couple of Mavericks classics (sorry, I didn't write down the song titles), he then settled in to perform music from his latest CD. For those of you who don't know about Raul or his CD... First, imagine a voice somewhere between Elvis Presley and Roy Orbison, with all the passion that goes with it. The new CD contains classic 50's songs with a country attitude. It is a slow paced CD that isn't for everyone. But, as I've said before, RaulMalo can sing the dictionary and it will sound great. So, this portion of the show was similar to the ACL show until he started to venture out again, singing songs like "Besame Mucho ". Maria was in a puddle on the floor after that one. Moving into his solo portion of the show, he took some requests and really showed off his vocal talents, only accompanied by his guitar and a harmonica played by a member of the horn section. The rest of the show mixed up his material, playing more Spanish classics like "Volver" and plenty of Mavericks tunes containing that great Tex/Mex sound. He finished off with Van's "Bright Side of the Road". The band behind him was tight and helped fuel the passionate energy that comes from Raul's voice. The band consisted of Raul was on guitar with drums, keyboards, bass and a sax and trumpet horn section. In the end we did everything we could to stay seated, but the music finally was just too much for us and when he came back for his encore we forgot to sit down, instead we did what you are supposed to do at a RaulMalo or Mavericks show: Dance the Night Away. We will not miss him the next time he comes around.
at July 20, 2008 No comments: 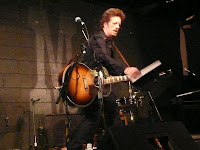 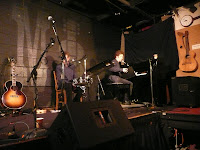 Although the ads said that Willie Nile hasn't played L.A. in 20 years, I somehow remember seeing him perform at the "Light of Day" benefit a few years back. In fact, that is how I first heard of him. His "Cell Phone (In the pockets of the Dead)" blew me away and I remember having to wait a few months for the CD to actually be released. "Streets of New York" is an excellent CD by the way. But I'm getting ahead of myself. We arrived way early on Saturday and so Maria and our friend Cathy, took off down the street while I held down the first place in line. As it turns out, there are extra benefits for being first in line. Besides getting to meet Gary, Willie's manager, McCabe's has a tradition of giving the first person in line a stool to sit on: Much nicer than the hard cement. So, Gary is a nice guy and we talk about how nice Willie is and how I'm going to love the new live CD that is coming out. Fun stuff. They let us in at 7:30 and we go right up to the front row. Sitting on the left, I notice that we are in front of the VIP seats. When the VIP's get there, I hear something about grass roots or something, but can't hear enough to get excited. Then one of them asks if the others have been to the new Largo. That's where I jump in. I proceed to tell them how great it is. They nod and smile. I don't think they wanted my input. Oh well. At just after 8pm, the show starts and... No opening act. Instead, the guy behind me stands up and goes to the stage to introduce Willie. So, those of you who watch The Office may have already figured out that it was Creed Bratton who used to be in the Grass Roots and is now on The Office who was sitting behind us. Creed does a great intro talking about how this is going to be so intense that we will be bleeding from our eyes. Willie loved that. Willie comes out on stage with his writing buddy, Frankie Lee, who plays a snare drum and sings backup vocals. Although he was on acoustic guitar most of the night, Willie did do a nice stint on piano. I think he is actually a better piano player than guitarist. He will be the first one to tell you he isn't a great guitarist. That is part of his charm. But playing guitar he stands and poses and moves like a rock star. Still it was only an acoustic guitar in his hands. It was a great visual. Playing lots of songs from his last CD, and several new songs, Willie charmed us all night, getting us to sing along to songs we have never heard and just making us laugh and smile. He is humble and funny and energetic; everything that makes for a fun rock and roll show. He closed the nearly 2 hour set with "I wanna be Sedated" using a choir of about a hundred to really make McCabe's Explode. After the show everyone hung around for an autograph, so we bought the live CD (it is very good) and headed out.

All the way around, McCabe's is a great showplace. They have good sound, a nice room and easily the nicest staff in L.A. Oh, and their cookies are from Trader Joes.
at July 02, 2008 No comments: