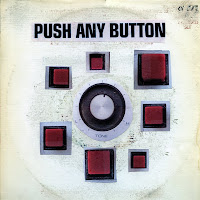 Earlier this year, Sam promised a CD that she felt would represent what she would have sounded like back in the 60’s and early 70’s had she been recording then. She has accomplished this without being totally retro and without stealing from her Beatles inspired sound of Martinis and Bikinis. The sound on Push Any Button is a wonderful mix of La La La’s from the Gilmore Girls, the modern edginess from Don’t Do Anything and melodies that could only be inspired by that great era of music in the 60’s. Maybe the song that accomplishes this best is “When I’m Alone” which has a classic 60’s melody, the Section Quartet playing 60’s inspired strings, harmonies that hearken back to the early 60’s female singers and a great little guitar solo in the last bridge that is just perfect. Lyrically, this is classic Sam Phillips; challenging you to develop your own interpretation and sounding just right (almost forcing you to sing along), even if you aren't sure what she is trying to say. My only complaints about the CD are the bonus tracks that went out to fans who purchased the CD early. The 2 original songs belong on this CD; they are that good. Push Any Button is available as a CD/mp3/Vinyl at samphillips.com and as a CD or mp3 at Amazon.
at August 06, 2013 No comments: