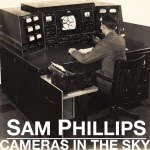 Sam Phillips - Cameras in the Sky (2011)
It is hard to believe that the year is over (actually a year and several months). Back in late 2009, Sam Phillips opened the Long Play, a music and art installation. After 45 songs, drum fills of the week, interviews, in-studio videos, blogs and hand made collages, the installation is complete.The final piece is this ten song digital LP, “Cameras in the Sky”. As always, there isn’t a weak song in the batch. While some of the songs fit nicely into her “A Boot and a Shoe” style, Sam continues to play with cranking up the guitar.
I got into my car today and the player was near the end of “Hide Space”, one of the more musically intense songs. It took me a few seconds before I remembered that this was Sam Phillips. I love this band she is playing with. As usual Eric Gorfain on almost everything (violin, guitar, piano, arranging strings), Jay Bellerose on percussion, The Section Quartet, Jennifer Condos on bass and of course Sam on acoustic guitar, electric guitar, piano and drums. Lyrically, I have to believe that the voyeuristic nature of the music industry coupled with the Internet had to have some influence on her lyrics this time around. Sam has always considered the creation process a private one. So this entire installation has had to balance her privacy with her fans desire to know as much as possible about it. Songs like “When I’m a Camera” and “Hide Space” seem to hint at that. She has done a brilliant job with the balancing act and when the site is finally pulled down (no exact date yet, but maybe only a few months away) I will miss visiting her; not unlike an old store that you love to go back to that is suddenly gone. If you are not a Long Play member, this is your last chance to download all of the songs. Go to http://samphillips.com and sign up before it is too late. Congratulations Sam on a wonderful work of art.
Jill Sobule and John Doe - A Day at the Pass (2011)
A couple of years ago Jill asked her fans to donate to the making of her CD. $80,000 later, she put together the excellent “California Years”. This time around, Jill got together with John Doe and invited her fans into the studio to watch a days worth of work. There was a steep price for a seat (I seem to remember it being $200, but I may be wrong). From that day came this joint CD. I’m calling it a joint CD because, according to Jill, it was supposed to be two separate EPs; one for Jill and one for John. Instead they combined them. Jill sings lead on 5 of the 9 songs and John sings lead on the rest. It is an enjoyable group of songs, with the highlights probably being Jill’s covers. I may be a bit biased but I loved “Never My Love”, but it may be just because I got to sing it onstage with her once several years ago. And her new version of “I Kissed a Girl” is rockin’. The whole album has a very loose feel to it. You can hear Jill call out “bridge” during “Shaky Hands” when the bridge of the song is coming up. Jill and John’s voices compliment each other very nicely and the band arrangements work. If you can’t wait, you can buy the digital copy at Jill’s website: http://jillsobule.com . Otherwise, it will be available at independent record stores soon. 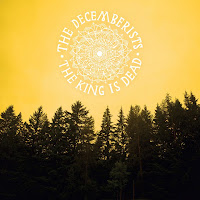 The Decemberists - The King is Dead (2011)
When the Decemberists first signed up with Capital, instead of selling out, they created one of their best CDs (“The Crane Wife”) keeping their unique style but spending more money on production. Then, maybe just to make their point, they followed with a rock opera of sorts (“The Hazards of Love”). In the 70’s, The Who followed “Tommy” with the more straightforward collection on “Who’s Next”. “Tommy” may be the work of art, but most people remember the songs from “Who’s Next”. And like The Who, The Decemberists have created a pop masterpiece after the larger than life opera. If you want to hear how a pop band creates songs that you just have to sing a long with but still hangs on to its integrity, buy “The King is Dead”. Enlisting the help of Peter Buck, The Decemberists came out with a very R.E.M. sound. Still, the ballads are classic Decemberists and the lyrics could come from no other band (how many of you have used the word “panoply” lately?... Defined as: a wide-ranging and impressive array or display). This mainly acoustic CD, is as close to country as The Decemberists have ever gotten. Gillian Welch sings on 7 of the songs and there is plenty of violin and steel guitar. Still, you will not confuse this with Lady Antebellum let alone Taylor Swift. On fist listen I was in love with this collection. Now I’m bracing for the backlash, which will surely come. But, I have no doubt that they will be performing these songs for many years to come.
Eleanor Fye - Love Stays On (2010)
The music on this CD is hard to pigeonhole. There is a little pop, maybe a touch of country, a definite singer/songwriter style and even some jazzier moments. Eleanor has a beautiful voice and it works with all of the styles but seems to work best on the jazzier songs. Get more info at http://eleanorfye.com .
at February 21, 2011 No comments:

The Decemberists at the House of Blues San Diego

I have been waiting for this show ever since hearing The Decemberists new CD, "The King is Dead". The album seems geared to be a sing-a-long CD and there may be no better crowd to sing along than a Decemberists crowd.
After a wonderful weekend at the Se hotel, we grabbed a quick dinner at the House of Blues and then got in line. Although I would have loved to be in the middle of the masses of kids singing along to the music, I decided that a balcony seat would do just fine this time. The House of Blues in San Diego has a small but intimate upstairs and we ended up in the front row. Perfect seats. Mountain Man was the opening act; a triplet of women who sang, mainly a cappella. Their music was very traditional folk and they were a lot of fun to watch.

At 9PM The Decemberists hit the stage running. Opening with The Infanta and then three songs from their new CD, they made it clear that they would continue to rely on new material in concert; something they have always done. In all, they sang 6 songs from “The King is Dead”. The rest of the songs came mainly from Picaresque, with a scattering of other selections. Colin Meloy is a perfect front man for all of this, cracking jokes with the band, teasing the audience and guiding us through their dark songs. And the audience eat it up, singing along whether they were asked to or not. Joining The Decemberists on tour this year is Sara Watkins. Her singing and violin playing (not to mention a few songs on guitar) fit so nicely into the arrangements.

The highlight of the evening was the return of “The Mariner’s Revenge Song”, which hasn’t been on their set list much over the last couple of years. To hear an audience sing along to an eight plus minute song that doesn’t even really have a chorus is impressive. And to hear a San Diego crowd pull it off was nothing short of amazing. They closed the evening with a beautiful ballad, “June Hymn”, from the new CD. 2 hours after they hit the stage, the evening was over. It was a perfect ending to a perfect evening.
at February 16, 2011 No comments: