Arlo's Alice's Restaurant will be playing every couple of hours today, starting right now. Happy Turkey Day everyone!
at November 25, 2010 No comments: 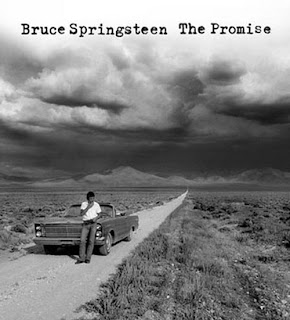 The Promise - Bruce Springsteen (2010)
Oh, where to start? :-)
A friend of mine emailed me the other day: “Saw Sunday Times, ad for Bruce S.
album coming out or is out called : THE PROMISE, What is UP with THAT!!!!!!!!!!????????????”. I explained to her that my station and blog’s name came from a Bruce Springsteen song that, at the time I started this station, had only been released on a compilation CD. I used the name because it represented so much of what my station was about. There has always been lots of Bruce on my station and The Promise could have easily been an alternative title to Darkness. I remember thinking, back in 2002, about the promise of radio and how it always ended up disappointing me (great stations never seem to last in Southern California). Most important though, it was a title that only a Springsteen fan would totally get. It was just rare enough to make it stand out. So much for that. Okay, on to the CD...
Let me start by saying that the box set is amazing. The whole thing is a replica of Bruce’s notebook from that time. I have just skimmed the DVD’s briefly, but a big fan of Bruce’s will want them. The remastering of Darkness on the Edge of Town is excellent. If you listen to music with a real sound system (you’re probably not going to notice on your IPod) you will notice the clarity and tightness of the sound over the original CD release.
So, let’s get to the meat of the package. There are two discs that are just titled “The Promise”. They are 21 of more than 60 songs that did not make the cut when Darkness was released. But these are not just outtakes. At the time Bruce was going for a certain sound for his LP and no matter how good the song was, if it didn’t fit, it was out. Great songs like “Because the Night” and “Fire” were given away to other artists (Patti Smith and Robert Gordon respectively). Bruce also loved to mix and match lyrics with melodies until he found the right fit. Songs like “Candy’s Boy” morphed into “Candy’s Room” and “Spanish Eyes” turned into “I’m on Fire”. There are other wonderful nuggets that just got lost over the years like, “Save My Love”.
Bruce could have called this set, “The River Prequel” because the style on most of these songs is much lighter than Darkness and they would have easily fit in on “The River”. But outside of the songs he gave away, the best of the rest ended up on “The River”. It is hard to complain, though, because this is the most exciting batch of music to come from Bruce in many many years. Even so, I love the piano only version of “The Promise” from the “Tracks” CD over this version. And “Racing in the Street (‘78)” is interesting, but doesn’t hold a candle to the Darkness version.
Should you buy this CD? It is really for the big Springsteen fans; a valentine in November. But there are so many good songs here, it is hard to believe that others won’t find this enjoyable; although they may want to just buy the CD and pass on the box set. Excuse me now. I’ve got to get back to watching the videos.
at November 20, 2010 No comments:

Angus & Julia Stone - Down the Way (2010)
I love this brother/sister group. Both Angus and Julia are songwriters and each take their turns singing lead. Julia sounds a bit like Joanna Newsom except that she writes more accessible songs. I saw them at the ACL http://aclfestival.blogspot.com this year and bought the CD based on that performance. I was not disappointed. One of my favorite CDs of 2010.
Balmorhea - All is Wild, All is Silent (2010)
An instrumental based band out of Austin, Balmorhea has the musical skill and the talent to do most anything they want. Without vocals they are limiting themselves, but there is a future here.
Luke Powers - Hwy 100 (2010)
I’ve enjoyed all of Luke’s indie CDs so far and this one is no exception. As always, there are interesting stories song from Luke’s unique folk perspective. http://www.phoebeclaire.net
DC Cardwell - Some Hope (2010)
From down under, DC Cardwell helps to prove my theory that the closer you get to Antarctica, the happier your songs sound. Okay, maybe that is a bit out there, but everyone from Crowded House to Emily Maguire to Midnight Oil, seems to have a knack for sweet melodies; and DC is no exception. DC’s style is very American Folk, but the melodies and some nice arrangements give it a little something extra. “Some Hope” is his first full CD, and although independently produced, it is being released here in the states next month. Until then, you can pick up this CD directly from his web site http://dccardwell.com/ .
Sharon Van Etten - Epic (2010)
I was listening to The Loft on Sirius/XM when one of the songs from this short CD came on. I was immediately grabbed by the vocals (a bit of Kathleen Edwards but less Country). I wrote the name down and grabbed a copy as soon as I could. I still was not prepared for how good this CD is. Almost every song grabs you even though they each have a different feel to them. Just pick this up and check it out for yourself.
at November 08, 2010 No comments:

A Cheryl Wheeler concert is always about Kenny White for me. I love Cheryl; her voice, her fun songs and especially her stories. But the stories haven’t changed much over the last few years. Although they are funny 3 or 4 times, I would much rather hear new stories. So, there was no Kenny this year and although Cheryl had the crowd in stitches throughout, it could be so much better. Cheryl is a naturally funny lady with great timing. Hopefully there will be new creative juices in the future for her.
Although I love full shows by Jill Sobule, I’m thinking that I may like her better when she is an opener. For the second time in a row I watched Jill open to a crowd that didn’t know her music. The first time, opening for J.D. Souther, she dropped the F bomb, grabbed the Coach House audience’s attention and never let it go. This time, she came out and sang her humorous songs from her latest CD, California Years. Knowing that this was a crowd looking for a laugh, Jill obliged them, performing “Where is Bobby Gentry”, “Palm Springs”, “San Francisco” and “A Good Life”, along with requests “Mexican Wrestler” and “Heroes”. It was a wonderfully executed 45 minute set with Dave Carpenter playing stand up bass (and backup vocals) on most of the songs.
Overall we (and I’m sure the crowd) had a great time and laughed more than you’d expect from a musical show. And, as always, the McCabe’s staff is friendly and professional. Can’t wait for the next concert there.
at November 06, 2010 No comments: