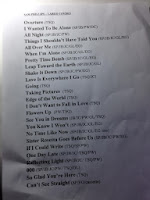 This may have been the best Sam Phillips show that I have seen in the last 10 years. There have been many highlights over the years, but this show had it all. Sam’s singing was effortless and beautiful tonight. Nothing new there. Her guitar playing was very self assured (sometimes she can be a bit hesitant on the guitar). She put on a full one and a half hour show with over 20 songs. That is as much as I’ve ever seen her play. And then there was the band. Oh, what a band. Of course there was Eric Gorfain and the Section Quartet. Jay Belarose was back on drums (one of my all time favorites). Patrick Warren, who was on the Boot and a Shoe tour played keyboards. That was pretty much the touring band from 2004. Added to this was Jennifer Condos on bass and and Greg Leisz on guitar (Eric also played guitar and banjo when needed). That’s 9 people on stage! And man did they sound good. The entire 9 only played on a couple of songs as members left and rejoined the stage as they were needed. But when they were all there, it was a great sound.  If there was a way to make money touring with this band, it would be, by the end of the tour, one of the best touring bands of the last few years. They were just amazing to watch. 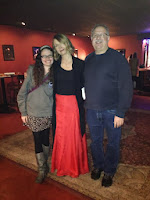 Before Sam came on stage, a woman was playing music on an old turntable, drawing on pieces of paper and sometimes throwing them into the audience. It was a bit of pantomime and was very cute. It turned out to be Sam’s daughter, Simone. Keep your eyes open for her in a few years.


Next up came the Section Quartet. Instead of playing covers from a multitude of rock songs, which they do so well, they performed what they called an Overture. It was really a medley of Sam’s songs; about 7 or 8. They ended up getting split into 3 groups because the audience applause forced them to stop a couple of times. Probably the highlight of this set was “Animals on Wheels”. Those who have seen Sam perform this know that she usually sings and uses an old tape machine to play the music. Every so often she wiggles the tape machine and causes the sound to wobble.  The Section Quartet came up with a way to play the wobble on their violins. It was hysterically funny and had many in the audience laughing.
Sam came on stage and played almost all of her new CD, Push Any Button, played several from her 2 Nonesuch CDs and several more from that period in between. And for those of us who have been following longer, she slipped in “I Don’t Want to Fall In Love” and “000” (which got a standing ovation). She was in great spirits joked with the crowd and basically led us through the evening as only she can; with her great sense of humor and down to earth attitude.

It was just a perfect evening. Sam, Eric, Jay and a few others hung around after the show and chatted with everyone. It was great seeing them all again. If you are in L.A., do not miss the Sunday night show. There are still tickets available.
at November 10, 2013 2 comments: