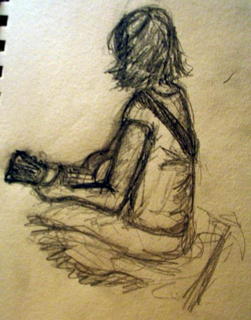 Yep, another evening of Jill Sobule. With her “no set list” approach to concerts, every evening is different. Tuesday night did not disappoint. Jill wasn’t as uhmmm, hyper as last month, but there is always plenty of energy at her shows. The theme this show, and there was really a theme this time, were women she knew in her life: Margaret, Karen, and a few others I can’t remember. It was a fun set. Late in the show she unplugged, totally, went out into the audience and sang 4 or 5 songs. She later told me her voice was a bit roughed up because of that. It was all fun and, well, typical Jill. Although I didn’t find my way onstage, I got two requests in: “Kathy Lee” (which she is threatening to retire) and “I saw a cop”. Actually, she didn’t finish “Kathy Lee” and skipped a verse in “I saw a cop”. But it was good enough. Jess again drew here. There are two good pictures coming, but this is a scan of Jill sitting right next to us during the audience portion of the show.

Opening the show was Tom Brosseau. I have seen him several times; opening for Jill and also Sam Phillips. He has a beautiful voice with a Roy Orbison falsetto that is breathtaking. His songs are really poems. It is hard to follow them though. Maybe a lyric sheet would make the songs more meaningful. Generally, I just get lost in his voice and lose track of the lyrics altogether. He actually joked around a bit during this show, doing a bit of a white folk version of a NWA song.