The lights went out and the crowd roared. Smoke filled the stage. Instead of circus music, eerie organ music played. Up onto the stage, 6 zombie like men carrying a coffin approached. They placed the coffin down and from inside an arm rose. It required something and Little Steven knew what it needed. He handed it a guitar. They raised the coffin and Bruce stepped out. That was October 31, 1980. And they recreated the scene last night! It was my first Springsteen show ever and this was my final Bruce Springsteen show of this tour. And what a night it was; including one BIG treat from Bruce. But, let's start at the beginning...

A friend, who I owe deeply now, got me a ticket through the band will call. I asked for a floor ticket not knowing that the band will call doesn't open until 6:30 the night of the show. When I found this out last night, I complained to one of the people who was working the booth who I knew worked for the promoter. He asked me my name and said, don't worry, you'll have one. Being a promoter, I didn't trust him, so I came early to the show. I'm still not sure why I came early, but at 3:30, there I was in the Sports Arena parking lot. I wandered around and couldn't find anyone I knew, so I went back to my car, turned on the radio and figured I would check email. No sooner do I turn on the radio then a car pulls up next to me. During Bruce's stadium tour (was that 4 or 5 years ago already?) I traveled to San Francisco with a group of strangers to see Bruce atPac Bell Park. They were friends of a friend. We sat in the pit that night (what a good omen). And there they were, parked next to me. So, I spent the next couple hours hanging with them, drinkingKetel One and eating some very good turkey wraps. Also in the group was Bill who flew in from Chicago for the show. Maybe Deb knows him. :-) They all had floor seats and should have been nervous about getting in the pit, but there was a serene confidence about them. They knew they were going to get in. As they waited for the numbers to be called, Joy, made a final karma move, selling her extra floor seat to a guy for $20. Moments later they found out they were in the pit (barely).

So, while they lined up, I went over to the will call area to wait. There I met Markus, the lead singer and songwriter of The Latebirds, a Finnish band. I plan to check them out when time allows. We had a great conversation about all sorts of things. And it turned out he was even a huge Sam Phillips fan. I didn't have time to tell him about how I proposed to her though. At 6:35, the window finally opened, I got my ticket, looked inside and... I WAS IN THE PIT!!!!! Putting on my wristband I headed inside (okay, the truth is that there was a long line to get in if you had floor seats so it was a good ten minutes before I actually headed in) and met up with Joy and all her friends. We were having a great time, but I was thirsty. Because we were all late getting into the pit, there were no real spots that needed to be saved so I could easily come and go as I needed. Wandering around the outside area, I walked past a section that probably needed to be guarded, but there was no one there. So there I was. And there was Nils? And Max? And Roy? And And... Little Steven!!! I ra 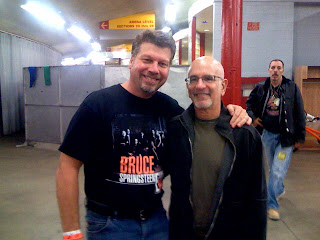 n back to the pit, grabbed Joy and Bill and said, "Little Steve is right over there (pointing) RIGHT NOW". We ran back to the spot and... He got a big hug from Joy, and a handshake from me. Bill got his picture taken with Roy and well, could the night get any better? YES.

So, Bruce comes out of the coffin and just like every other night on the tour yells the perfect Halloween yell, "Is anybody alive out there!" And on went the show. This was my first real pit show and man was it good. Bruce was having fun the band was alive! Nothing compares when you're that close (I may have been standing on the equivalent of 8th or 10th row). He did Tunnel of Love and Nils just ripped the solo. Everyone was talking about it afterwards. Reason to Believe just exploded. Patti's "Town CalledHeartbreak " was so intimate, with Bruce and Patti so close exchanging vocals. It was a great show, but we wanted a gift. And during the encore we got one. Bruce said, "Here's apre -Halloween treat for Los Angeles". It only took two notes for the place to go crazy. I was told by a good authority he has never played "Kitty's Back" in Los Angeles. If he has, it's been a long long time. And man! They played it like it was a regular on the set list. Bruce's solo kicked ass and the band was so tight. I still haven't come down. So, how do you top that? The only way you can, segue it into Born To Run. I may never recover. Soon the show was over. We all stood there, dazed. What an amazing night. What a great show. I sure hope someone taped it.

Setlist (from www.backstreets.com):
Radio Nowhere
The Ties That Bind
Lonesome Day
Gypsy Biker
Magic
Reason to Believe
Night
She's the One
Livin' in the Future
The Promised Land
Town Called Heartbreak
Tunnel of Love
Working on the Highway
Devil's Arcade
The Rising
Last to Die
Long Walk Home
Badlands
* * *
Girls in Their Summer Clothes
Kitty's Back
Born to Run
Dancing in the Dark
American Land
at October 31, 2007

Sounds like an awesome show! I wish I could have been there. I'm desperately trying to find photos of Bruce in the coffin -
he rented it from my prop shop
I need to add a sign to our Oak Toe Pincher that says "Bruce Springsteen Slept Here"

You can find the video of the opening of the show at http://www.brucespringsteen.net . If you have the right software, you can capture the screen.