It was a beautiful day in Austin. Okay, by the time I got out of bed, worked out and got dressed the day was half over. But, it was beautiful from that point on. The first stop was food. Usually, the 3 or 4 of us would head over to Chuy’s for some excellent Tex/Mex, but I’m alone for the first part of this trip so I just headed over there by myself. I do love the people of Austin and the bartender at Chuy’s was as nice as they come. I had a margarita for lunch (which is rare for me) to go with my Elvis Presley Memorial Combo (3 different enchiladas and a crispy taco... no wonder he died young). I then headed into downtown where I met up with Guy, a friend who was working the MTV special (I guess the Foo Fighters were going to be performing). He gave me tour a of the set and we caught up (I only see him once a year, if that). After that, it was a quick stop and a bunch of money spent at Waterloo Record Store (I won’t even mention the short stop at Amy’s Ice Cream next store). Since SXSW hadn’t officially started, I headed back to hotel, worked on the computer for a bit and then headed out for some music.
There always seems to be a good band playing at The Saxon Pub and with all of the choices this night, it was the combination of bands that led me there. 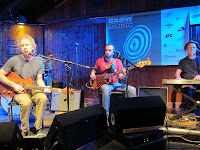 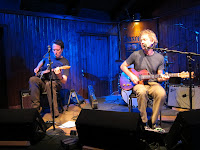 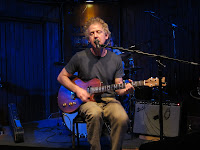 Up first: Bruce Hughes. I believe I saw Bruce last October. Many of his songs have this funky groove, which I love, but... It is the short 3 minute blasts of pop that come out occasionally that make you wonder why he isn’t bigger than this. He gave us both in a set that just flew by. 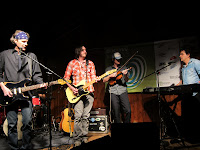 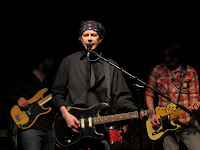 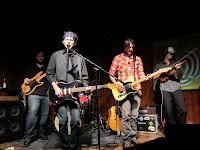 Up next was Kurt BoDean of the BoDeans. He has a new band called Wirefence and they are your typical Austin musicians: Really talented and very tight. The sound is very similar to a BoDeans sound, although maybe a bit more serious. Still he had the girls up front dancing. He kept the BoDeans songs to a minimum and concentrated on his newer material. All and all a very good show. 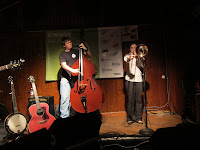 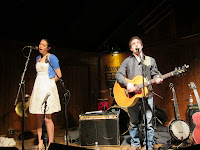 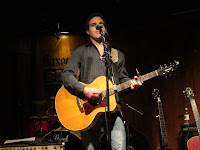 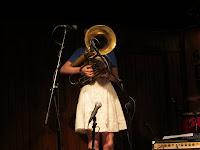 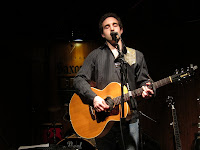 The evening finished up with Curtis McMurtry. For those who don’t know... In the beginning there was Larry McMurtry. He begat The Last Picture Show, Lonesome Dove and James McMurtry (a great singer songwriter). James begat “We Can’t Make it Here Anymore” (look it up on Youtube, you won’t be sorry) and Curtis McMurtry. Curtis, still very young (almost everyone in the band had Xs on their hands because they weren’t old enough to drink), has a unique vision and isn’t afraid to go after it. Playing with a drummer and stand up bass (plastic) player, he also had two women flanking the stage. One played the trombone and did almost all of the soloing for the night. The other sang backup vocals, played clarinet and baritone tuba. It was an interesting sound; youthful and filled with energy. His lyrics, from what I could hear, were often funny or at least interesting. Those of us who hung around for the finish really enjoyed the set. He is someone worth keeping an eye on.
at March 17, 2011