The Swell Season at McCabe's 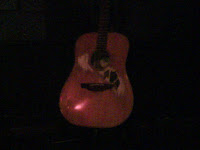 I can't believe nearly a month has gone by and I haven't written about this. In what may turn out to be one of the best club shows of the year for me, Glen Hansard and Marketa Irglova performed for a small group of fans (under 150) at McCabe's Guitar Shop in Santa Monica. For nearly 2 hours they sang songs, told stories, made us laugh and thoroughly entertained us all. That they are talented and have written some beautiful songs goes without saying. If you haven't seen them before, the extra piece that makes them so special is their humble and down to earth attitude. When Glen begs you to sing along, he really wants you to be a part of the show. His stories are always touching and funny. In one of them, he gives Bono all of the credit for the Swell Season getting to the Academy Awards (something that changed their lives). Marketa, who is just as humble on stage, was supporting a new hairdo giving her an extra bit of sophistication. Although this is really Glen's band, he always leaves a nice chunk of the set open for Marketa to lead. Sending this show over the top was the inclusion of Javier Mas for several songs near the end of the show. Javier is a guitar player from Spain who was also one of the highlights from Leonard Cohen's recent tour. The pure joy he displays while playing incredible leads on his acoustic guitar was a perfect compliment to the Swell Season. For those of you in So Cal who missed the show, the full band will be playing the Hollywood Bowl this summer. Don't miss them.
at April 04, 2010