John Hiatt at the Coach House 2010 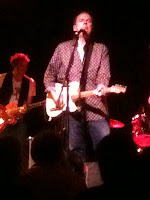 Last Thursday I saw John Hiatt for the umpteenth time and it never gets old. He always gives his best. He always puts on a great show. He always mixes old and new music. He throws in a few jokes and makes us laugh. And... he sings with the spirit of one who has lived his life. I never realized how good a singer he was until I heard some back to back songs with John and then a cover version. The emotion coming from within just can’t be beat.
Still, there are subtle differences from tour to tour. There was no keyboard on stage for the first time that I can remember (although I may have missed the last tour). Normally he would move to the keyboards to sing his ballads. Instead he didn’t do many and when he did, they were done on his acoustic guitar. Backed by a solid three piece band featuring Doug Lancio on guitar (has worked a lot with Patty Griffin), this version of John Hiatt rocked the house. I haven’t seen John rock this hard in some time. And the crowd loved it.
Speaking of crowds, we love going to the Coach House. For the Hiatt show, we were seated across from a couple who had seen John many times. We started trading stories of many of the bands we both loved and how we were probably at some of the same shows. Suddenly this Irish woman (Bernie) to the left of me, taps me on the shoulder and the next thing I know we (her husband Peter has now joined in) are talking about even more bands and definitely seeing the same shows (they were at Shawn Colvin the week before). In fact, we plan on seeing them on Sunday since we are both not only seeing Crowded House in San Diego, but we are both in the front section and we are both having dinner at the Humphrey's restaurant. Did I mention that I love going to the Coach House?
Over the 2 hours, John performed many of our favorites and several songs from his new CD, “The Open Road”; one of his best CDs in years. The live versions of these songs were even more rockin then on the CD and blended nicely with his classic rockers.
Overall we had a great time and after being disappointed with “Same Old Man”, I am once again a rabid John Hiatt fan. Don’t miss him when he comes to your town.
at August 21, 2010