It is hard to believe 2010 is almost over. There is so much to say and so little time. Let’s see how much I can get in here: 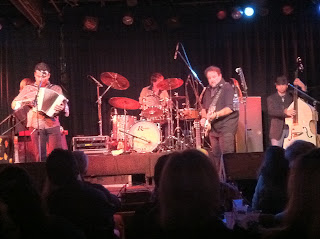 We’ll start with a concert from a few weeks ago. Raul Malo played the Coach House in San Juan Capistrano for the second time this year. With each performance Raul seems to get better and better and it seems (at least in the OC) fewer and fewer people are wondering about a return of the Mavericks. With just a quartet behind him (the keyboardist played horns and vibes)
Raul and his band rocked the house with more then enough energy. 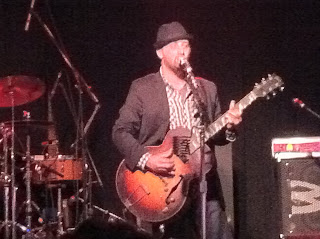 Opening for Raul was Austin blues/singer/songwriter Seth Walker. When I saw him in Austin earlier this year, he had bass and drums behind him, allowing him to play lots of acoustic leads on his guitar. This night he was alone (except for one song when he brought up Raul’s drummer). As a soloist, you really get a better feel for his songs and it is a much more intimate performance. I really enjoyed him this way. In the end, he had most of the audience singing along to “Days Like This”, which is a classic. At the end of the Raul’s show, Raul brought Seth back on stage and made the crowd sing “Days Like This” all over again. It was very funny and telling as to the respect that Raul has for Seth.

On to the music. Here are the lastest CDs being added to The Promise:
Seth Walker - Leap of Faith (2009)
I loved his show in Austin with two pieces behind him. Loved him even more in the OC as a solo show. And... Love him even more with a full band and Seth singing a light friendly but soulful blues. If you like Jack Johnson or Ray LaMontagne, you should check Seth out. http://sethwalker.com
Elton John/Leon Russell - The Union (2010)
If you love the early Elton and early Leon, you can’t help but like this CD. There are no big “hits” on it, but The Union is still a very enjoyable.
Amy Cook - Let The Light In (2010)
Produced by Alejandro Escovedo, Amy sounds a lot like a rougher Brandi Carlile. She’s got that big voice and some big music behind her in her latest release. http://amycook.com
Poul Finn Pedersen - Coveralls (2010)
The leader of local favorite Missiles of October, Poul leads us through a batch of covers (get it, Cover alls?) with a couple of self written songs just for good measure. These are wonderful interpretations and its a pretty interesting group featuring Steve Earle, Bob Dylan and Anders Osborne songs. I’m not sure how to get hold of this CD other than at concerts, but you can start at http://missilesofoctober.com .
Spottiswoode & His Enemies - Wild Goosechase Expedition (2010)
This is maybe the least strange and most accessible CD from Spottiswoode. That’s not to say it is commercial. Some of the songs are from a solo CD he released earlier and they all sound even better with the full arrangements. http://www.spottiswoode.com
Neil Young - Le Noise (2010)
By the end of my first listen to Neil’s latest, I wasn’t real excited about writing this review, let alone which songs I was going to pick to put on the stream. Now, as I listen to each one again and try to do the thumbs up and down, I can’t seem to pull the thumb down. One song at a time I really like this CD.
Elizabeth and the Catapult - The Other Side of Zero (2010)
More poppy than their previous efforts there is still a unique sound here that separates them from the rest of the pack. Zero is smart and a lot of fun.

There is so much more. But here is the first batch. Some how I need to get this done in the next few days.
at December 24, 2010